A huge first lap pass by reigning champion and Pukekohe local boy Liam Lawson sealed the deal for the Kiwi as he roared home to take the first race of the weekend at the fourth round of the Castrol Toyota Racing Series at Pukekohe Park.

He made it the perfect day for him and his engineers at M2 Competition with pole position, the race win and fastest lap and he narrowed the gap to series leader and team mate Igor Fraga to just nine points.

“We had a pretty average start,” said Lawson afterwards. “I know what I need to fix it, I was just too cautious with the clutch. To get past Igor was an important pass I had to do and I’m happy I made it stick. The car was really good in the race and the nice thing is we shouldn’t have to do much to it for tomorrow.”

The Red Bull Junior had been beaten away from the lights by Brazilian ace Fraga, but passed him into the turn five complex on Pukekohe’s back straight and never looked back. Igor who lost two places in the move, was left to battle Yuki Tsunoda for the remainder of the 20 lap race, which was interrupted by two Safety Car periods for incidents involving Emilien Denner and Caio Collet. Denner’s incident also stopped the race while the M2 Competition car was recovered. Collet’s crash was the Renault junior’s third of the weekend and gave his mechanics at mtec Motorsport engineered by R-ace GP another busy afternoon.

Fraga had made an exceptional start off the front row and won the drag race to the first corner and edged away through the first sequence of turns to take a car length lead. Champion Lawson, however, had other ideas and drafted the popular Gran Turismo supported racer all the way down the first half of the back straight to the new section of the iconic Pukekohe track. He dived down the inside of Fraga in a classic hold your breath move. Fraga was caught a little by surprise and Lawson wasted no time in completing the pass, leaving Igor scrabbling for grip on the outside. That let Tsunoda through and as the dust settled, Lawson led from Tsunoda and Fraga.

The first laps flew by without drama, but that changed on lap five when Emilien Denner went off at turn 4, the tricky corner that has been catching out many of the drivers during testing. He ended up buried in the tyre barrier, forcing a Safety Car and then a red flag. At that stage the order was Lawson, from Tsunoda, with Fraga hot on his heels, an impressive Cohen, Collet, Franco Colapinto, Oliver Rasmussen, Grégoire Saucy, Lucas Petersson and Petr Ptacek, the latter recovering well after a grid penalty having qualified fifth in the morning.

After a clean restart Lawson clocked fastest lap after fastest lap as he built a decent lead through the first half of the race. Fraga looked frustrated in third, unable to find a way around Tsunoda despite jinking left and right at every opportunity.

Lawson’s handy advantage was wiped away for a second time when Collet crashed half way through the 20 lap race. The field was left to sit nose to tail behind the Safety Car for another five laps. Spike Kohlbecker was forced into the pits for a nose and front wing change but rejoined without losing a lap and with five to go they were released for a final time.

Lawson again pressed home a speed advantage around his home track and despite a couple of brave attempts by Fraga, Tsunoda was able to maintain his second place. At the flag it was those three out front and a 1-2-3-4 for M2 Competition with Cohen bagging his best result in the championship after his strongest day. After qualifying third, the young ace from Israel was able to maintain pace with the leaders and hold off a fierce pack behind him squabbling for fifth and beyond.

That particular battle went Franco Colapinto, the young Argentinian bagging another top five result for Kiwi Motorsport. Oliver Rasmussen was mtec Motorsport’s top runner in sixth, while Saucy brought his Kiwi Motorsport car home seventh. Petr Ptacek recovered well from his grid penalty for eighth while Jackson Walls came home in ninth after a solid drive from fourteenth on the grid. The youngest racer in the field, Tijmen van der Helm, rounded out the top ten. 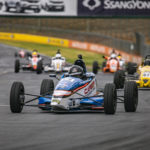 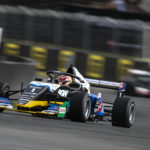