Championship leader Simon Evans and up and coming star Ryan Wood have had it all their own way so far in the first two rounds of the Best Bars Toyota 86 Championship, but it could all change this weekend at Manfeild for round three.

Wood won two races to Evans’ one at the Grand Prix weekend and then Evans bounced back to win two to Wood’s one a week later on the national circuit, but they will both have their work cut out at Feilding to fend off drivers like Rowan Shepherd, Brock Gilchrist and perhaps a few more searching for their first win in the category.

Shepherd has really found form early in the championship after impressing in the mini endurance series at the end of 2020. He did enough to win the round last time out with three consistent races right at the sharp end of the field, but he’s super keen to turn that pace into his first race win in the Toyota 86.

“We have proven that we have the pace to run for the top step in each race but yet to get the win.” He said. “The team and people behind me deserve a win so I’m sure the elbows will be out this weekend.”

Another who could shine this weekend is Brock Gilchrist, enjoying his best season to date in the championship aboard the CareVets car. He was challenging the leading group at both of the Hampton Downs meetings and will also be fighting for his first victory. He’s a close fourth in the championship just a whisker behind Shepherd so will be keen to come out fighting from the start in the Manawatu.

Marco Giltrap is the standout rookie after two rounds, benefitting from the input of team mate Evans and is another with plenty of raw pace and some great racecraft. He too could shine this weekend – a podium or race win is a definite possibility given his rate of improvement.

John Penny leads the masters’ class after an impressive return to the category. He was at the sharp end all weekend at Hampton Downs and led Race 2 in style until edged out of the top places. He knows Manfeild well and has plenty of experience racing a Toyota 86 there from his previous stint in the championship. A win isn’t off the cards for him and a podium finish this weekend is a real possibility.

It will also be a big weekend for Justin Allen, who is probably one of the strongest of the midfield runners but another to be chasing that elusive first win. Manfeild is his home track and he has hundreds of laps there racing and testing. He could well be the dark horse to shine this weekend.

With drivers of the calibre of Christina Orr-West, Alexandra Whitley – who also led a race at the weekend – Ronan Murphy and endurance champion Tayler Bryant also in the field, the third round at Manfeild – Circuit Chris Amon will provide another classic encounter. Any of them could step into the championship mix and great racing from the field of fourteen cars is a guarantee. 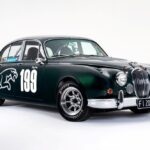 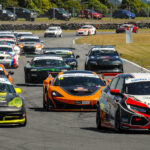