In a rare case of ‘rain literally stopping play’ at a motor racing meeting here in New Zealand, the 2021/22 SAS Autoparts MSC NZ F5000 Tasman Cup Revival Series has ended up being called two races early after heavy rain on Saturday night and on Sunday morning left parts of the Taupo track at which the final round of the popular NZ-based historic single seater category was being hosted, swamped.

The heavy rain and forecast for more prompted meeting and track officials to call a rare halt to the two-day meeting before racing got underway on Sunday morning, leaving categories like the NZ F5000 one with just the one race – the 8-lap preliminary one on Saturday afternoon – to show for their efforts.

“It was certainly a shame that they had to call the whole meeting off after just the one day, said series spokesperson, Glenn Richards, “but it really was quite miserable here this morning, and with the Met Service extending it’s heavy rain watch for the Taupo area through until Monday it was obvious that the weather was not going to get quantifiably better any time soon, so from that perspective I think that the organisers of the meeting did the right thing by calling a halt to proceedings when they did.”

At the very same circuit just a day before, but in weather and track conditions (cool and dry) which could hardly have been more different to those everyone involved in the meeting woke up to on Sunday morning, the first (and as it turned out only) SAS Autoparts MSC NZ F5000 Tasman Cup Revival Series race of the weekend on Saturday afternoon was won by Feilding ace Kevin Ingram (Lola T332).

In a real ‘red letter’ day for the former New Zealand Formula Ford champion set a stunning pole lap of 1:26.550 in the category qualifying session on Saturday morning then set the fastest race lap on the way to a dominant debut series’ victory over Grant Martin (Talon MR1/A) and Tony Galbraith (Lola T332) in the 8-lap ‘preliminary’ race later in the day.

Fellow front row starter Steve Ross (McRae GM1) helped himself to an early lead off the start, only to spin away his advantage as he exited the circuit’s first up-and-down, multi-corner complex.

With Ross having to wait for every other car in the 13-strong field to pass before he could get going again, it left Martin and his sweet handling Talon MR1/A as the meat in a high-speed Lola T332 sandwich; with Kevin Ingram setting a punishing pace ahead and the ever-improving Tony Galbraith matching Martin’s lap times just behind.

Glenn Richards (Lola T400), the only other driver apart from Ingram to dip below the 1:28 barrier in the race as he chased down Tony Galbraith, ended up 4th, Steve Ross managed to work his way back up through the field to cross the finish line 5th and class stalwart Russell Greer (Lola T332) celebrated his return to the SAS Autoparts MSC NZ F5000 Tasman Cup Revival series field by qualifying and finishing the race 6th.

The ever-improving Kett went quicker and quicker as the day went on, taking almost a second out of his (8th) best qualifying time in the first race to cross the line 7th, albeit just 0.638 in front of a fast-finishing Tim Rush (McLaren M22) who was 8th.

With both the other McLaren M10B drivers having a troubled day Taranaki beekeeper Toby Annabell put in a blinder of a run in his car, qualifying it 9th quickest with a 1:35.107 (over five seconds faster than both usual rivals Tony Roberts and Frank Karl) and ending up 10th in the race.

Shayne Windelburn (Lola T400), meanwhile, was just happy to be back in the cockpit for the first time this season, after the COVID-19 pandemic derailed his original plans to compete at all of the rounds.

Windelburn made it back up to 9th place after starting from the back row of the grid having failed to make it to the track in time for the morning qualifying session.

Chevron B32 driver Alastair Chalmers was slowed by an engine misfire and finished 11th, while Class A stalwarts Tony Roberts struggled with handling issues with his McLaren M10B which saw him drop to 12th spot, and Frank Karl was the only driver who failed to finish the first race after spinning then being unable to restart his McLaren M10B’s engine 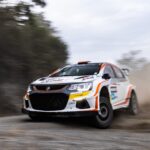