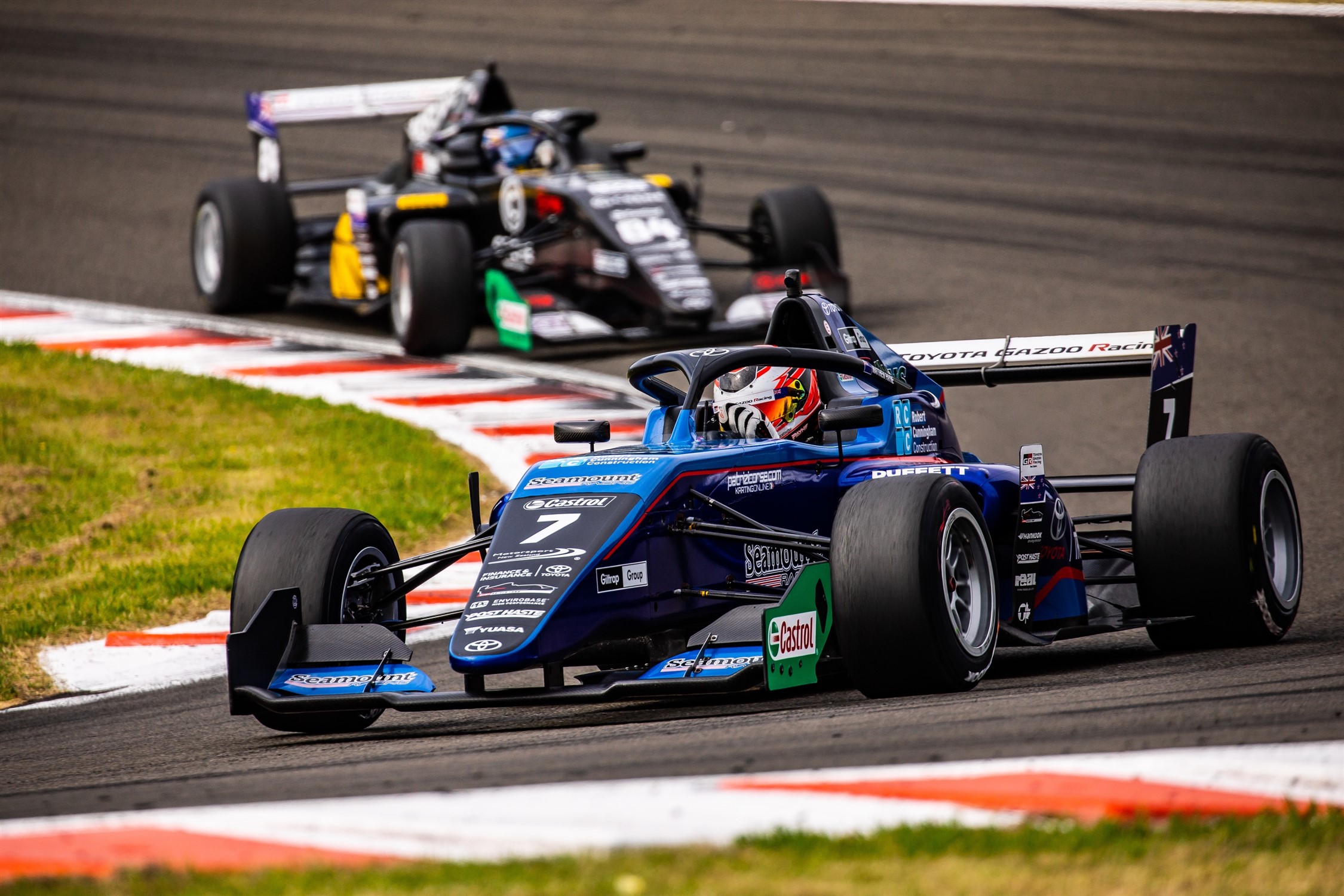 Runaway Castrol Toyota Racing Series championship leader Matthew Payne made it four from four with another winning performance at Manfeild to win the Dan Higgins Trophy and have one hand on the 2021 title.

Payne once again controlled the race throughout to win by over eight seconds in yet another masterclass delivered by the impressive young driver. There was some satisfaction for Peter Vodanovich, who chased hard in the early laps but had to settle for second place with one eye on third placed Kaleb Ngatoa.

“I was just focussing on pushing on lap by lap as much as I could,” he said. “I had a few lock ups at the start and in the middle as I was just trying to find the edge.

“The car was awesome though. The tyres didn’t really go off that much. Peter was really quick at the start and he was in my mirrors. I thought I need to get on with this, I was waiting for the tyres to come on which they did in the end.”

Vodanovich credited a much better start for his strong race. “It was definitely a much better start than the first race. I managed to tuck in behind and follow Matthew for the early part of the race, but he had awesome pace. I’m just happy to finish second.”

The start was once again was led away by Payne. Alongside him on the front row Peter Vodanovich almost matched him but it was Payne who won the drag race up to the first turn after a marginally faster getaway.

Further back Chris Vlok made his best start in the championship so far and slingshotted his way into third in the first turn. Second row starter Kaleb Ngatoa quickly found a way by Vlok into third after the corner but Payne, and to a lesser extent Vodanovich had already made the getaway and were out of reach.

In the early laps Payne kept a watching brief on Vodanovich unable to pull away with ease as he had in the morning’s first race. Vodanovich was often the quickest on track, but Payne’s consistency paid off and by halfway he was just under five seconds ahead.

Ngatoa drove a lonely third for much of the race but in the closing stages – despite some discomfort from the tight seat belts – he was able to reduce the margin between himself and Vodanovich. This would be the most interesting aspect of the race as the laps counted down.

At one stage the gap had been around three seconds and inside the last few laps Kaleb lowered the gap to around a second and a half, the young Marton racer giving it everything on his home track. All of the Kiwi drivers racing in the series however, have a high degree of talent and despite his relative lack of experience in single seaters, Vodanovich was able to hang on.

Further back the battle for fourth fifth and sixth was intense as Vlok tried to hold off the charging Conrad Clark and Frazer, firmly focussed on the battle to beat the other to a top finish in the championship table.

Vlok’s fourth place survived until lap five when the two youngsters found a way by and then went head to head for the rest of the race, separated by little more than half a second throughout.

The verdict eventually went in Clark’s favour and he took fourth, ahead of Frazer and Vlok.