Two on-track penalties totalling ten seconds were enough to relegate a dominant Matthew Payne from first to second in Race 3 on Sunday morning at Manfeild Circuit Chris Amon – the penultimate one in this year’s COVID-shortened championship.

It meant Billy Frazer, who finished second on the road, inherited the win. It was his first in this year’s Castrol Toyota Racing Series.

Payne – who had record pace in qualifying when setting his best laps – pulled up to the start out of his grid box and incurred the penalty immediately, meaning the first part of his race was all about making up time on second placed Billy Frazer.

He was then given a further second five second penalty after the race for an infringement under Safety Car conditions and his on-the-road victory of 9.6 seconds was not quite enough to deny Frazer his first win.

Any chance Frazer had of beating Payne on the road was gone at the halfway mark after yet another series of relentless laps from Matthew gave him a healthy cushion but Billy stuck at it and was able to build a decent gap on the cars behind.

Chris Vlok made a good start again and found himself in third place on the exit of the first turn. In a carbon copy of the situation on Saturday, Kaleb Ngatoa tucked in behind and immediately attacked through the infield section on the first lap.

This time, however, contact between him and Vlok spun him off at the iconic ‘Splash’ curve. The Safety Car was deployed and then two bits of luck went Ngatoa’s way. First of all he managed to restart and undamaged car and secondly the Safety car stayed out long enough for him to re-join the back of the pack on the same lap – with his tyres already at race pressure and temperature.

The result was that he quickly despatched Conrad Clark and tucked onto the back of Vodanovich, who took until lap nine to find a way past Vlok. Ngatoa and Clark followed when Chris went across the grass on the exit of the infield hairpin.

As Vlok fell back, the mid-field group was left with Vodanovich in third, Ngatoa in fourth and Clark in fifth. Unable to make up time lost to the lead two, Vodanovich focussed on the third place and despite the close attentions of a charging Ngatoa in fourth, Peter held on for the final place on the podium. 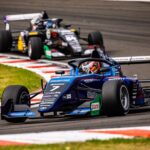 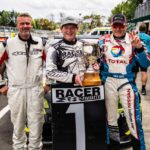