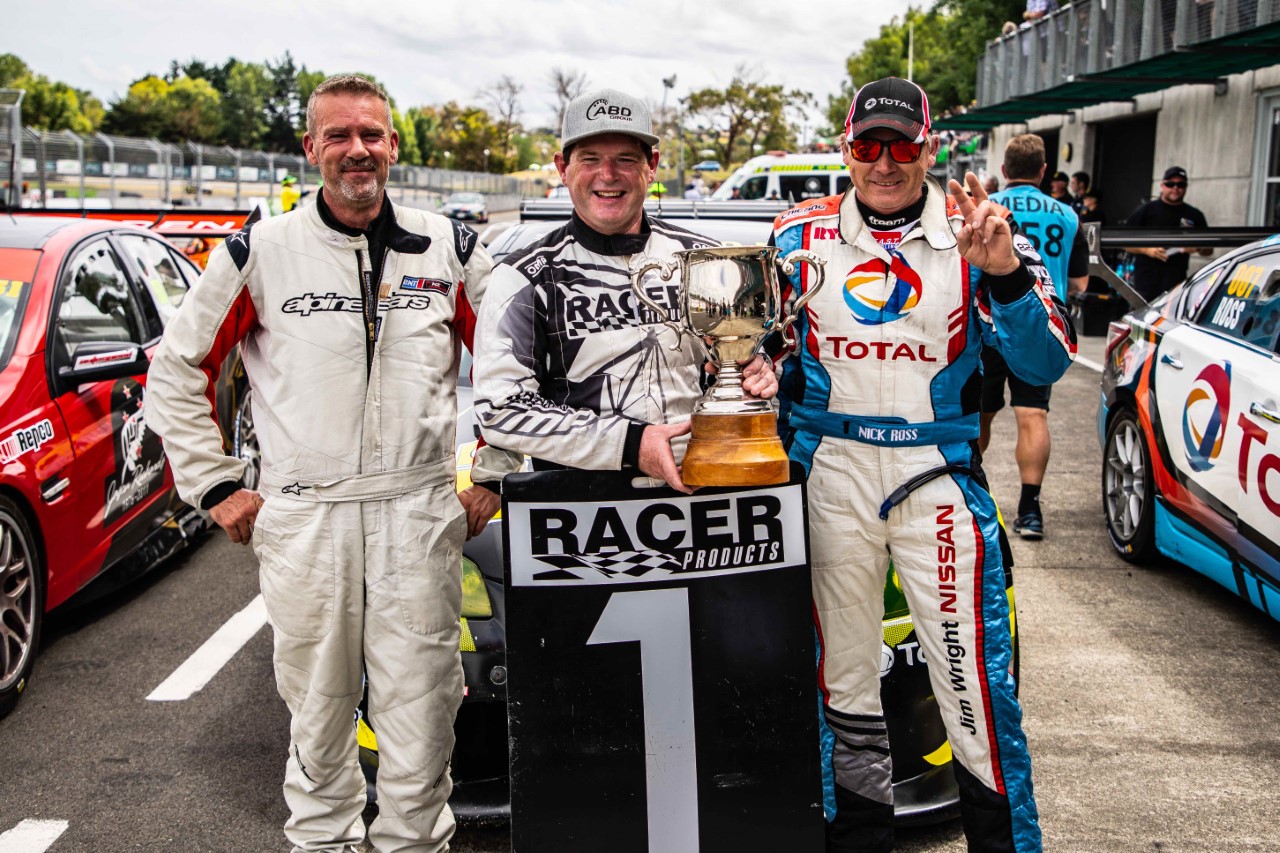 Tim Edgell has been presented the Jason Richards Trophy having won the feature race at Round three of the Racer Products V8s at Manfeild today.

It was a clean sweep for Edgell having won the two qualifying races on Saturday also.

Starting his Holden Commodore from pole position for the feature race, Edgell lead the field from another Holden Commodore of Brady Wild, with the Mustang of Sam Collins slotting into third.

A wild moment for Brady Wild at the turn five hairpin sent his Commodore into a spin, allowing the rest of the field to file through. Wild resuming the race in last place. By the end of lap two, Edgell has a five second lead from Collins.

Trouble struck for Rod Gimblett pitting a number of times with engine trouble before eventually retiring from the race.

There was another moment for Wild at the hairpin. His Holden going into another spin before re-joining the race.

With the pit window open, the whole field pitted for their compulsory pit stops.

Brady Wild handing over to co-driver Simon Evans, with the rest of the drivers staying in their cars to go the whole race distance.

With compulsory pitstop times complete, the field re-joined the circuit within seconds of each other, Sam Collins in his Mustang taking over the race lead from Edgell.

Though a lap down, Simon Evans, now at the wheel of the Wild Holden Commodore, was the quickest man on circuit, logging consecutive fastest laps. Further trouble was to strike however, the Holden slowing before eventually pitting and retiring from the race with a broken front splitter.

Collins lead started to diminish, having been hunted down by Edgell. With Edgell now close to the back of the Mustang, Collins made a small mistake on the entry the infield complex. Collins losing control of his Mustang and making heavy rear contact with the tyre wall.

The safety car was then deployed while the stricken Mustang was retrieved. With circuit officials having to make repairs to the barrier, the field remained behind the safety car until officials declared the race.

With Edgell winning the race, the podium was rounded out by Nick Ross and Rob Wallace.

“No contact all with Sam there, he made bit of an error there going into ‘Splash’ and lost control of the car. He was driving a really good race, and was being defensive which is fair enough as it was for the lead,” said Edgell post race.

“I was having to be patient and bide my time, I didn’t want to have an incident myself.

“Really happy with the win. We actually carry #8 on the car which was significant for Jason Richards. One of my sponsors, the late Greg Horne from BNT sponsored Jason all through his career.”

“We’ve worked pretty hard to make our car reliable and to last the race. It’s not the fastest car out there, but for this form of racing it’s very competitive.”

The next round of the Racer Products V8s will be at Taupo, March 26-28.