A titanic struggle right down to the last race of the season has seen Southland’s Jordan Michels win the 2018/19 New Zealand Formula 1600 Championship title. With a ‘never-give-up’ attitude along with some Southland grit, Michels headed into the final race of the five-round series still six-points behind Auckland’s Josh Bethune. While battling for the lead on the last lap and with the title within his grasp, Bethune was spun out of the race ‘gifting’ Michels enough points to take the championship.

“I’m lost for words,” exclaimed Michels. “My thoughts are with Josh (Bethune) and his team, that is rough luck and I feel for him and the team.”

Bethune has always been the driver to beat, leading the championship since the first race in November last year. Right from the start of the final round, Bethune appeared to be in charge setting the fastest lap in qualifying and gaining another valuable two-points for the effort. He then went on to win the first race from Michels extending his lead to ten points.

In the second race, Michels was able to pull this back to six-points finishing ahead of Bethune in second. Rookie driver Callum Crawley took the win.

As Michels explains, the Ron Frost Memorial Trophy feature and final race of the series did not go according to plan.

“It wasn’t that flash as we started fifth and had to work. We were able to jump to fourth and battle with Spike (Kohlbecker) but meanwhile James (Penrose), Callum (Crawley) and Josh were getting away up front. I was still fourth heading into the last lap but couldn’t quite get to the top three, when on the back straight Josh spun and retired from the race.

“It’s been great racing for the championship and to go to the last race to decide the title says a lot about the competition. It’s been my toughest season so far. Yes, we were lucky, but we have had our share of bad luck as well. I’m very proud of the team and grateful for their effort over the season. Congrats to Callum for winning the round.”

Michels’ team had been on the back-foot after practice on Saturday afternoon.

“We had a huge crash in practice yesterday at turn one,” said Michels. “It was a big impact and we damaged a lot of parts on the car we don’t normally have spares for. We were able to get the car going only through the help of other competitors’ team helping with the necessary parts. I’m so grateful to all in the category to get me going again. It says a lot about those who race in Formula 1600.”

Crawley won the final feature race adding the Ron Frost Memorial Trophy to the Morrie Smith Memorial Trophy he won last weekend at Manfeild Park at the fourth round. His two race wins at Pukekohe secured him the round plus third place overall behind Bethune. Fourth overall went to Zac Stichbury from the Hawkes Bay with Canterbury’s James Penrose fifth.

Within the category there are also three separate classes of racing. Michels also wins the Class 1 title from Bethune with Crawley third. In Class 2, Penrose takes the title ahead of fellow Cantabrian’s Jack Noble-Adams and Robert Toshach. Andy Downs wins Class 3 from Noel Atley and Dave McKenzie.

While the NZ title has now been wrapped up, most drivers will head south for the sixth and final South Island Formula 1600 Championship round in Timaru 6 April. Bethune has a comfortable 83-point lead over Michels and will look to retain his title from the previous season. 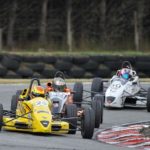 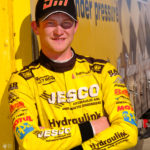