The one-time WRC rally winner blitzed the WRC2 field and stormed to a dominant national championship victory in the fifth round of the series by one minute and 37 seconds in the Hyundai R5.

Paddon becomes the single most winning driver in the history of the championship by becoming the only person to win six overall NZRC titles. He also has more rally wins than any other driver.

Ben Hunt, who started the day second in the standings and in the title fight, crashed heavily on the final stage of the day in his Skoda New Zealand R5.

Hadyn Mackenzie finished an impressive sixth in the Toyota Yaris AP4 with Jack Hawkeswood surviving some gremlins in the debut event for his Toyota Yaris.

Dylan Thomson took a significant step towards winning the NZRC Group N 2WD class as well as the overall 2WD title after a solid day in his Ford Fiesta.

The Christchurch-based Thomson won both categories to boost his championship points tally.
He headed off Charlie Evans (Honda Civic) and Antony Te Rito (Honda Civic) in the class.

John Silcock claimed the Historic 2WD title in his Mazda RX7 but lost ground to Thomson in the overall 2WD battle, which will go down to the final day tomorrow.

Bryn Smith enjoyed an outstanding day in his 50ONE50 Mitsubishi Lancer to win the Rally Challenge 4WD class for the day and take the title battle into a final day. Championship leader Jeff Ward had to settle for second in his Subaru WRX while Sean Haggerty was third in a Subaru Impreza.

Jonty Brenssell produced a stunning drive to win the Rally Challenge 2WD class but more impressively was second overall 2WD for the day in his Toyota Starlet.

The final round of the 2022 NZRC season will take place on Saturday’s second leg of Repco Rally New Zealand – with six stages north of Auckland city to test the country’s best drivers. 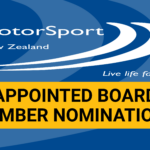 Call for Appointed Board Member nominations