Championship leader Matthew Payne raced to a comfortable win in the first race of the weekend at the final round of the 2021 Castrol Toyota Racing Series today.

Starting from the front with a time that would have put him on pole for the hotly-contested NZ Grand Prix at the challenging and fast Circuit Chris Amon in 2020, Payne made a clean getaway and was quickly into his stride. He had established a lead of two seconds within the first four laps and then pushed that out to over four seconds at the halfway mark.

A drive without any mistakes left nothing in terms of opportunity for lonely second-placed racer Kaleb Ngatoa. Payne took the race’s fastest lap with ease as he extended his championship lead with three races to run.

Ngatoa made a great start on his home track to emerge in second after the first few corners of duelling but couldn’t match the leader’s pace in the early laps. He did manage to close Matthew down by a small margin as the race entered its final laps, but by then Payne was cruising. Another job well done for the youngster brought him his third win in a row.

“I got a good start, and Kaleb got a really good start, I could see him in my mirrors,” said the championship leader afterwards.

“We rushed down to turn one, I didn’t really know where to brake but I got through and the other two carried on fighting behind. I was pushing all the way to the end. It was twitchy through the mid-section of the circuit but I think that’s the same for everyone and we all have to deal with it.”

The most interesting aspect of the race, other than the blinding pace of Payne, was the intense battle for third place which was also a continuation of the battle for the remaining top places in the championship. Billy Frazer, Conrad Clarke and Peter Vodanovich were all eyeing third place as the series went into its final weekend and it was Clark who emerged from the first of four battles by taking third on the road behind Payne and Ngatoa.

Vodanovich started from third on the grid but didn’t make the best of starts and fell to sixth. He passed Chris Vlok around the outside on the first lap to get into fifth and then quickly joined Frazer in the chase of Clark. Conrad got his head down and managed to build a gap of over a second to Frazer in the second half of the race, leaving Frazer with his mirrors full of a charging Vodanovich. Frazer got his head down in the closing laps to close down the gap to Clark by a fraction, but Clark’s third narrowed the gap to Frazer in the points.

It wasn’t easy for the former F4 China champion but he was delighted to get his first top three result in the championship. “It’s been a long time coming,” he said. “We didn’t have the best luck at Hampton Downs and just couldn’t get the car to work. We’ve got a bit of speed to find to catch up to Matthew and Kaleb but for now I’m very happy with podium.”

Sixth place Chris Vlok made a solid start and bagged some quick laps during the middle of the race but couldn’t quite get into the battle for third.

The Saturday feature race – for the Dan Higgins Trophy – takes place later today with Payne once again on pole position but with Peter Vodanovich alongside him on the front row, no doubt fired up to be the one to stop Payne’s impressive run. 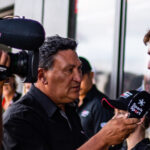 Grand Prix weekend gets thumbs up from broadcasters 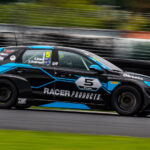