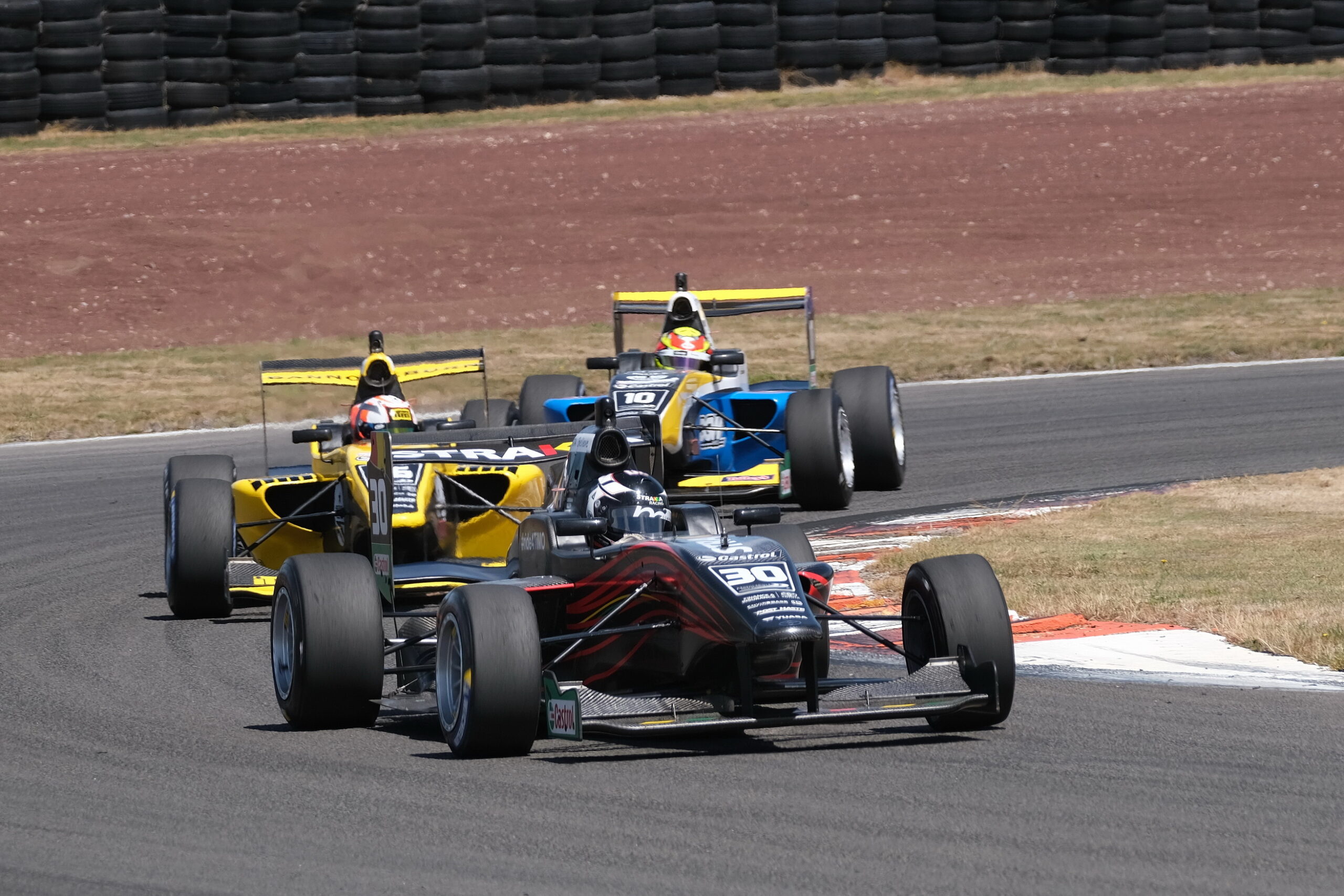 With the grid based on the finishing order from the Saturday afternoon race and the top six finishers from that starting in reverse order, it was Muth and Leitch on the front row and each made perfect getaways, moving in unison to the first corner a couple of car lengths up on the field with Muth claiming the inside line and the lead at turn 1.

Behind them the rest got away cleanly with all eyes on Marcus Armstrong, who lost the lead in the championship on Saturday after a front suspension failure. The Ferrari junior driver was quickly into his stride, passing two cars in the first corner confusion and then making up another place to make it three on the first lap.

Out front, Muth and Leitch were already taking control of the race early on but Lawson wasn’t letting them get away and settled into a stalking role as Leitch began to throw the occasional attack at Muth, something he would do throughout the race.

The field had split into a three way battle for the lead, with Russian Artem Petrov not far behind in fourth. Fifth was Raoul Hyman and he headed a busy pack that included Petr Ptacek, Saturday winner Lucas Auer, Cameron Das, an impressive Dev Gore and Calan Williams. And towards the back there was another group – with Armstrong in the thick of it.

Anyone not watching the battles up front was watching Marcus, who was putting in some very impressive lap times as he fought his way through the field and towards the points. Eleventh by lap six, tenth a lap later and then a run of huge laps regularly a second quicker than the rest as he hunted down and passed first Dev Gore and then a struggling Ptacek. Up to eighth by the end and visibly closing in on Lucas Auer by the end, it was a fabulous drive to mitigate the disappointment and points loss from Saturday.

Lawson could be forgiven for playing the waiting game out front as Leitch threw everything he could at Muth throughout the second portion of the 15 lap race and particularly in the dying laps but the Belgian held on in impressive style to take the win and make up for the one he lost at Highlands at the first round of the championship.

“I’m really happy to get my first win,” he said afterwards. “I’ve come close a couple of times, the third time is a charm as they say. I think I had a good race and did a good job to manage Brendon behind me. He had really good speed. I couldn’t afford to make a mistake as he would have gotten through.”

Leitch also enjoyed the memorable battle, adding: “Esteban had some really good pace. It was a tight race. We had some good speed over him, but struggled with a minor mechanical issue. The track conditions have been changeable over the weekend and it’s made it a little bit difficult to adapt to. We seem to be going a little bit better in the cooler conditions, maybe it’s because I’m from Invercargill!”

Further back Petrov had a lonely race in fourth but kept the leading trio well in his sights. Cameron Das drove a strong race to fifth, putting a great move on sixth placed Raoul Hyman in the process. 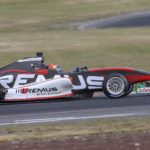 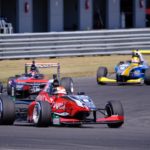