Fantastic weekends for Ryan Wood and Simon Evans in the Best Bars Toyota 86 Championship at Pukekohe Park have set up a grandstand finish to the 2021 season.

Championship leader Rowan Shepherd is now just two points ahead of Wood and a further five ahead of Evans with one round to go next month at the Bruce McLaren Motorsport Park, Taupo.

The three races at Pukekohe Park promised much and each delivered – with Wood winning two and Evans winning one. Championship leader Shepherd wasn’t able to dominate as he did at Manfeild and his championship lead was slashed.

Now just seven points separate all of the top three drivers and it’s all set to be one of the closest finishes in the seven year history of the Toyota 86 Championship.

All three races for the weekend were on Sunday and that meant a busy day for drivers, mechanics and series officials. The track action began in style when Wood pulled off a spectacular move in the dying stages of the first race to take a half car length win from Shepherd in the first race.

In a thrilling race, the win looked set to go Shepherd until the final drag race to the flag and that went Wood’s way by less than half a car length. Evans came home just behind to take the final step on the podium.

Simon put his considerable experience to good use in the second race of the weekend racing through from eighth place on the reverse top ten grid to take a comfortable win after a masterful display.

Wood and Rowan Shepherd could nothing about Evans’ speed or lead in the Wet & Forget TR86 as they came from ninth and tenth on the grid to finish second and fourth. The result closed up the championship table even further and also saw rookie Marco Giltrap take his first podium in the championship in his Lexus-backed car.

Wood took his second win of the weekend in the third and final race, taking a lights-to-flag victory and racing away to win by over three seconds from Shepherd and Evans. With points from the first two races dictating the starting grid for the final race, it was Wood who started from pole position in the Wholesale Cars Direct TR86, with Evans alongside him on the front row and Shepherd and Giltrap on the second row.

Ryan made the best getaway from the grid and led into the first turn as the others streamed in cleanly behind for the 14 lapper and he was never headed, carving out a dominant win and leaving the rest in his wheel tracks on his way to the race and round win.

“It’s been a great weekend for us and it sets everything up nicely for the final round,” said the delighted winner afterwards.

“We’ll just treat as we have every round and try and be competitive and do well in every race. The driving quality throughout the field is excellent and I’m fully aware of how good the top drivers are, but obviously a good weekend like this gives us confidence heading into the final.”

Drivers and teams have three weekends before returning to the track for the big finale in Taupo over the weekend of April 16-18. 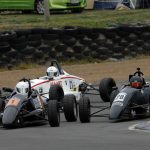 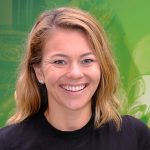