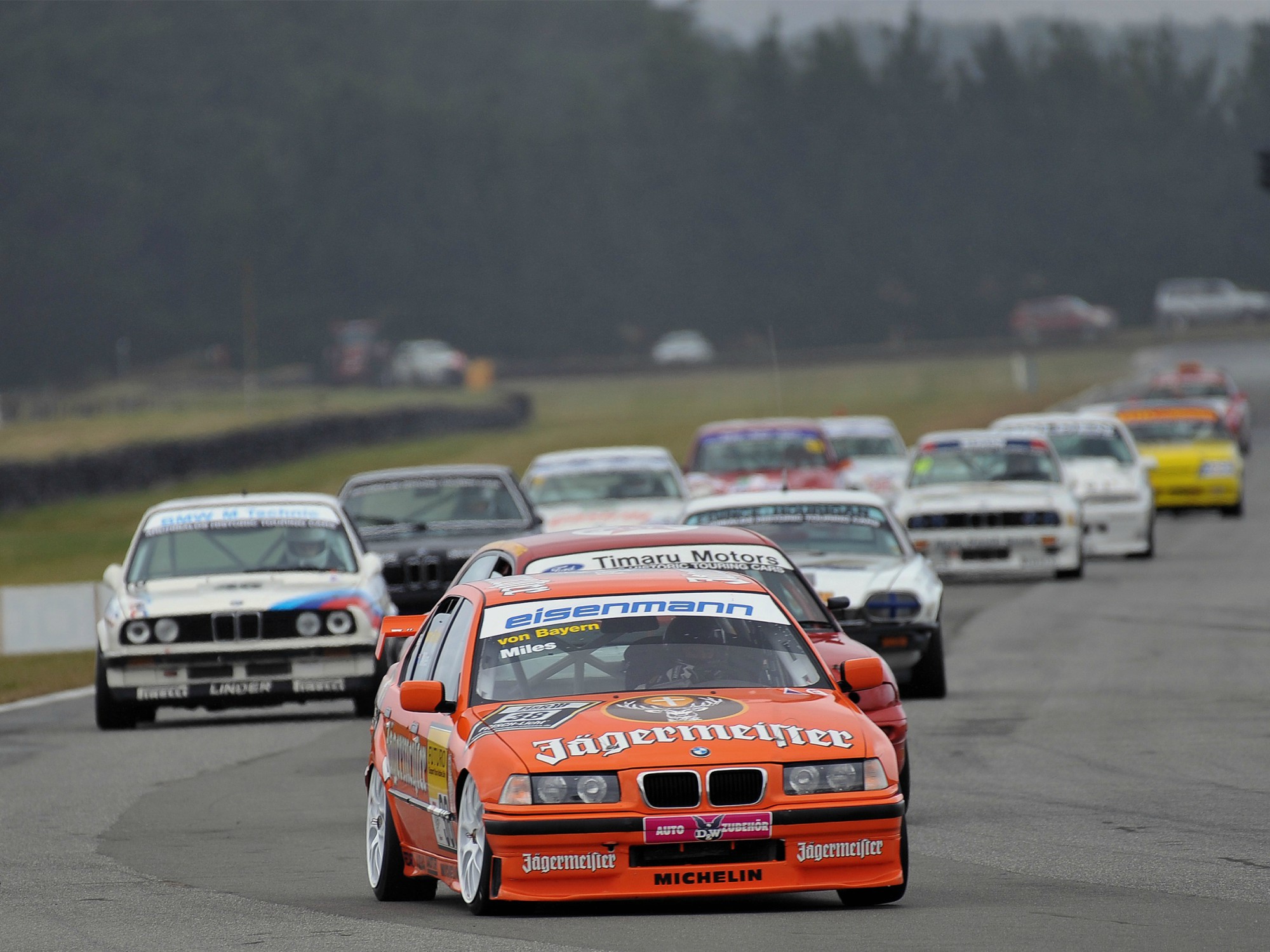 BMW drivers Bruce Miles (E36 320i Super Tourer) and Arron Black (E30 M3 Gp A) shared the spoils at the final round of this year’s Archibalds Historic Touring Car Series (HTC) at the annual Evolution Motorsport Classic SpeedFest at Invercargill’s Teretonga Park over the weekend.

However Christchurch man Miles – who qualified second quickest and was first across the line in the Saturday race only to be relegated to third when a 10-second penalty for a false start was imposed – came back from a sixth place finish in the second race of the weekend on Sunday morning to pip pole man Black virtually on the line to win the third before leading the final race of the weekend and season later in the afternoon from start to finish.

Black remained a factor in both races Miles won and capped of his own weekend with his and the category’s fastest race lop of the weekend  – a 1:05.325 – in the final, the only one of the four races which started and finished on a dry track.

Best of the rest over a weekend which saw crews as busy as drivers changing between slicks and wet weather tyres was Timaru NZTC category original Kevin Pateman in his V6-engined Ford Telstar.

He finished a weekend best second in the red-flag punctuated first race on Saturday before finishing fifth in the second race, third in the third and fourth in the final, after again running third early on behind the runaway Miles/Black duo before Christchurch driver Murray Cleland finally managed to catch him then pull away in Bruce Miles’ other E36 Super Tourer.

Unseasonably cold and damp weather conditions played their part on all four races, the first of three Cooke Howlison BMW-backed six-lappers on Saturday

The race was effectively a two-part affair after it was red-flagged after just two laps so that officials could remove Simon Crampton’s E30 BMW M3 GpA, which had slowed the stopped between the Loop and Castrol corner.

The field was already well mixed at this point, however, after third quickest qualifier Lindsay O’Donnell spun his Volvo S40 entering the first corner. Though those behind were able to avoid hitting the Volvo Austin McKinley from Christchurch ended up with some panel work.to do on his Group A Holden Commodore VK after tagging one of the other cars as both tried to avoid the O’Donnell Volvo.

To add to the drama – and right on time – a rain shower lashed the track as the field was waiting on the race to be re-started.

Bruce Miles was again quickest off the rolling start though Arron Black stayed within striking distance, while category original Trevor Crowe (GpA BMW 635i) made the most of the tricky track conditions to catch and pass fellow Christchurch driver Peter Sturgeon (GpA BMW E30) to take 4th place.

Black then won the second Cooke Howlison BMW-backed race on a wet track on Sunday morning form father and son Lindsay and Matthew O’Donnell with Dunedin driver Stephen Grellet enjoying his most competitive run to date in his ex-Paul Radisich BTCC Peugeot 406 Super Tourer working his way up to fourth place ahead of Kevin Pateman,  Bruce Miles, GpA Jaguar man Gary Johnstone and Nick Young in his GpA BMW 325i

Lindsay O’Donnell joined pole-sitter Arran Black on the front row of the grid for the third – this time  Southland Tyre Centre-backed – race which started just before the lunch break on Sunday, and held second place for the first two laps before being caught and passed by a charging Bruce Miles then outbraking himself on the rain-slicked track with two laps to go and running off the road at the hairpin.

The Volvo was undamaged but that was the end of O’Donnell’s race, elevating Kevin Pateman to 3rd,  Trevor Crowe to 4th, Nick Young to 5th and Gary Johnstone to and event-best sixth.

Stephen Grellet was another to lose control  on the damp track, starting from P4 but spinning off – again without car damage on the opening lap. Matthew O’Donnell suffered a similar fate as the group of cars he was with funnelled into the Castrol left-hander. A wheel off the track was all it took to see him spin, pushing him back to 14th place before he could gather his BMW Super Tourer up and work his way back up to 11th place at the flag.

Having pulled out a decent lead early on Arron Black looked like winning his third race in as many starts until the final run from the Elbow corner to the chequered flag.

Putting in a final charge – one which netted hm the fastest race lap, Bruce Miles caught Black’s  E30 BMW by the pit lane entrance and was past as the chequered flag was waved, the margin just 0.59 of a second

Biggest mover this time was Lindsay O’Donnell who set the third quickest race time-  a 1:06.391-  as he charged through the field from his back of the gird starting place to finish 5th.

Also setting his best time in the final race was Steven Kelly who set a personal best time in his NZTC BMW 320 on 1:08.761..

CAPTION: Bruce Miles (#38 BMW E36 Super Tourer) claimed two wins from two starts at the final round of the 2019 Archibalds Historic Touring Car Series at Invercargill’s Teretonga Park over the weekend. The other two races were won by fellow BMW driver Arron Black (#15). Lindsay O’Donnell (#40 Volvo S40) joined Black on the front row of the gird for the third race and was the big mover in the final race. Photo credit: Fast Company/Richard Dimmock 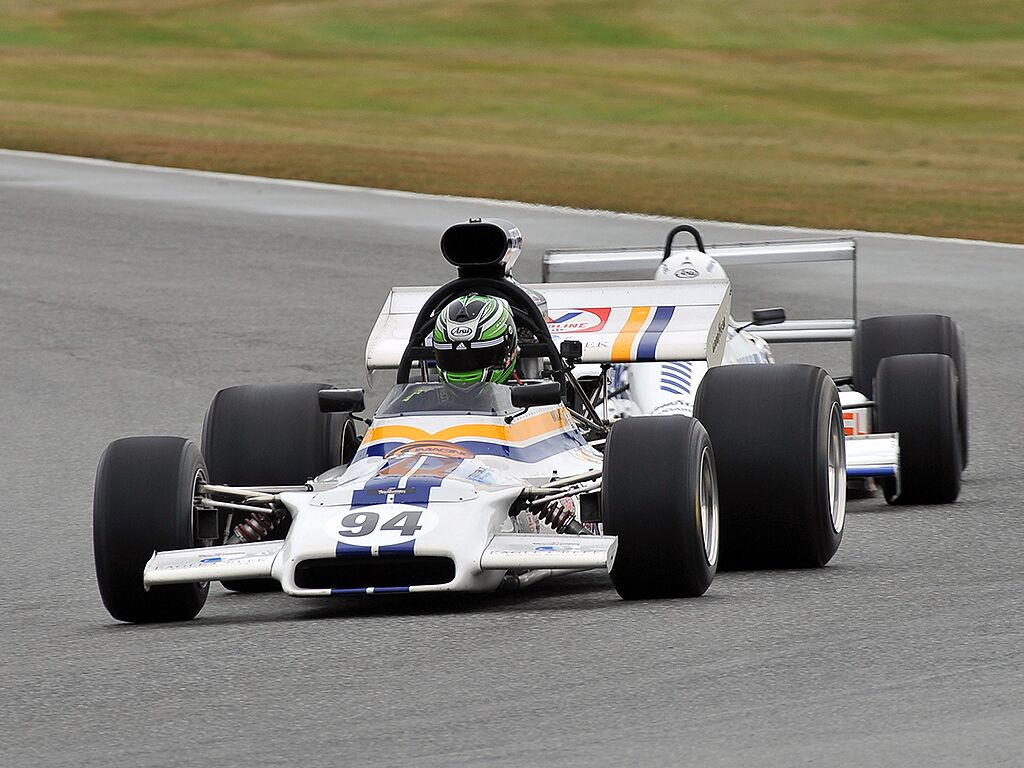 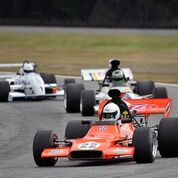 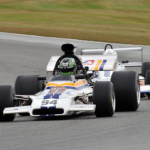 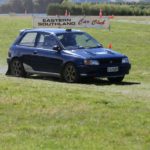 HAVE A GO MOTORSPORT FOR LADIES & YOUTH