Great night for the South at MotorSport New Zealand awards

It was a great night for the Southland Sports Car Club and those involved with the club at the annual Motorsport New Zealand Awards in Christchurch on Saturday night.

Four club members were acknowledged, one posthumously, plus a member of the neighbouring Eastern Southland Car Club who has performed Clerk Of The Course duties at Teretonga Park over a long period was also recognised.

Southland Sports Car Club Race Committee Chairman, Bevan Gerrard says, “the awards are great recognition for several long serving individuals who have given outstanding service to the club and our activities. We are lucky to have people who dedicate their life to the sport and their families who support them in those endeavours.”

Wayne Shieffelbein and Barry Leitch both received Distinguished Service Awards. Shieffelbein has been a member of the Southland Sports Car Club for over 25 years and has put his hand up to help from day one. He competed for a time and his involvement as an official has gone as far as gaining his Clerk of the Course licence and assisting in race events at Teretonga Park and the Hamilton Street Races. He has also run the Rally Of Southland as Clerk of the Course. Shieffelbein served a two-year term as President from 2006 and he has also served on the Teretonga Race Committee for several years.

Barry Leitch has carried out many restorations of overseas racing cars, including Formula 1 machinery over a thirty-year period at Leitch Motorsport in Invercargill. A competitive racer, his passion for the sport led him to join MotorSport New Zealand’s Historic Advisory Commission where he has now served for 20 years. His experience and depth of knowledge has been invaluable to advancing the historic side of motorsport. He was a long-time sponsor of Teretonga Park’s Classic SpeedFest and he has supported his sons’, Damon and Brendon, in their racing endeavours.

Neil Madden of Winton received a Technical D’Honneur Award. Madden has been involved in motorsport since 1979 when he signed up with Southland Sports Car Club as a Scrutineer where he still continues to volunteer his time. In 1989, Neil was appointed as a MotorSport New Zealand Technical Officer and has continued to work in that role for both their Championship Race Series and New Zealand Rally Championship. Neil is an accomplished Scrutineer with a thorough understanding of the rules and regulations and enjoys sharing his experience and knowledge with others, both competitors and officials alike.

The late Steven Kennedy, who passed away in February 2020, was recognised with a Steward D’Honneur award. Kennedy had achieved much, both locally and nationally, holding various positions within the Southland Sports Car Club such as part of the Club’s Executive, a Chairman of the Rally Committee, a President of the club from 1985 until 1988 and Chairman of the Board Of Control. He was made a Life Member of the Southland Sports Car Club in 2009.

Elected onto the Executive of the national body in the late 1980’s he went on to become the Motorsport New Zealand President from 1998 to 2010. During that time, he oversaw the introduction of the highly successful Toyota Racing Series and the founding of the Elite MotorSport Academy.

He was also an FIA Steward, Chair of the Asia – Pacific Rally Committee at the FIA and a Member of the World Touring Car Commission.

The club also nominated Alan and Sharon O’Brien for the Volunteer Of The Year Award. The award is a particularly difficult one to win with hundreds of nominations from all over the country and while the couple were not selected on this occasion the club invited them to the awards night and felt they would have been extremely deserving winners. 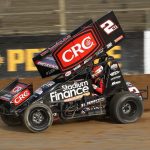 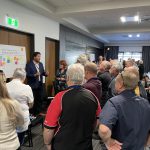