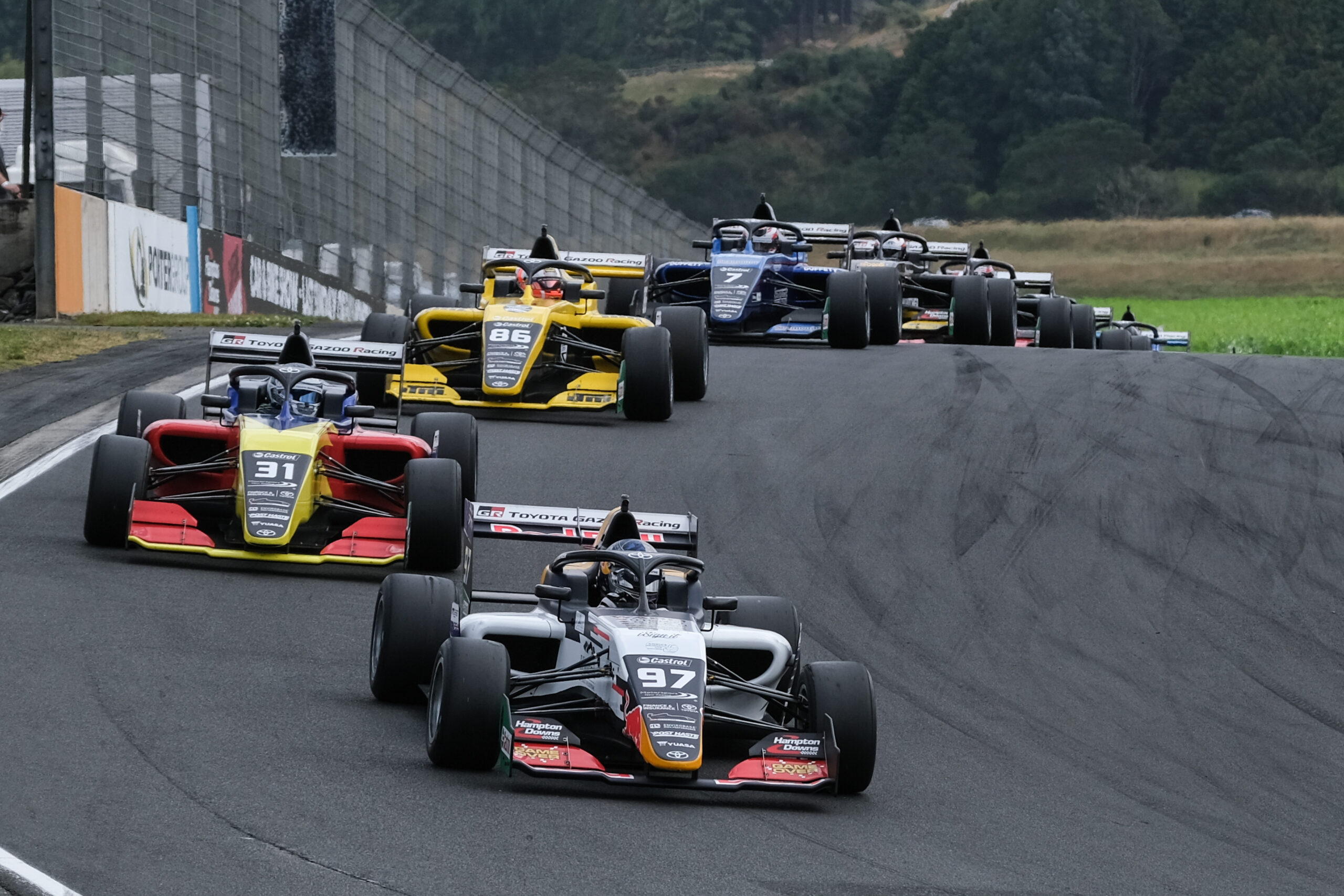 Shane van Gisbergen continued his 100% record at the New Zealand Grand Prix meeting with victory in the second race of the Castrol Toyota Racing Series.

It was no easy task for the V8 Supercar racer, however, as rival Chris van der Drift pressured him throughout.

After starting from pole position, he made a much better getaway at the lights and beat fellow front row sitter Chris van der Drift in the drag race to the first turn. Second row sitter Ngatoa got a poor start and dropped back outside of the top five while Matthew continued his impressive rookie form with another good start. It wasn’t enough to prevent the wily Brendon Leitch finding a way by early on in the race and as it settled over the first couple of laps it was van Gisbergen, van der Drift and Leitch who set the early pace.

Further back, Greg Murphy picked up a broken front wing after contact with Andre Heimgartner in the fierce mid-field battle and although he didn’t look like he had lost much speed, he stayed out for another lap before heading for the pits and retirement, saving his strength and endurance for the 28 laps of the Grand Prix. Seventy nine year old Ken Smith decided to do the same a little later and with a record 50th New Zealand Grand Prix to start in the afternoon, it was easy to understand why.

Out front van Gisbergen had established a lead of just under a second and as the field streamed through five laps nose to tail it was the Bathurst champion ahead of Chris van der Drift, with Brendon Leitch in third, Matthew Payne in fourth, Daniel Gaunt going well in fifth, Ngatoa in sixth, Andre Heimgartner in seventh, Billy Frazer in eighth, Damon Leitch in ninth and Tom Alexander rounding out the top ten.

The Safety Car came out on lap eight after Tom Alexander went off and beached his Toyota FT60 in the gravel at the notorious Double ‘B’ corner, a combination which had been challenging all drivers in all classes at the Grand Prix meeting.

The race resumed after ten laps and Shane went early and took Chris with him. The Tasman car had a look and Shane defended robustly, with the battle immediately allowing Brendon Leitch to throw his hat into the leader’s ring. Van Gisbergen hung on, however and settled back into the lead while a little further back Payne showed his intent with a look down the inside of Leitch.

Heimgartner had made solid progress and was running a strong fifth with Ngatoa in his mirrors in the high speed train. Both were piling the pressure on Payne and giving the single seater rookie a major test of his defensive skills in his first weekend of wings and slicks racing. Payne’s impressive response was to go even quicker and he attacked Leitch – who was suffering some tyre degradation – in the midfield with four to go and briefly took third. Leitch wasn’t done, however and repassed the youngster around the final corner for third, pushing him into the dirt at the same time.

This all helped the flying Heimgartner and when he and Leitch made contact Payne was through. The dogfight and punch up left Heimgartner with damaged suspension and Leitch a wounded third. It also brought out another Safety Car with three to go. Leitch was unable to continue and was forced to pit, later admitting he felt the incident was down to him.

With Heimgartner’s car needing a recovery truck, the race finished under the Safety Car with SVG taking another win, van der Drift taking another runner up spot and Payne taking the final spot on the podium in a repeat of the Saturday result.

Ngatoa recovered well from his poor start and stayed out of trouble for fourth while Damon Leitch secured his best result of the weekend so far with a solid fifth. Conrad Clark came home sixth, Peter Vodanovich seventh, Joshua Bethune a noteworthy eighth after a challenging first day on Saturday, Billy Frazer ninth and Chris Vlok rounding out the top ten. 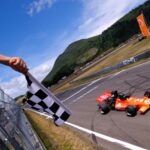