Local driver and New Zealand Formula Ford champion, Alex Crosbie, will have a fight on his hands this weekend as the third round of the 2022/23 Yokohama South Island Formula 1600 Series gets underway at Teretonga Park in Invercargill (3-4 December 2022). Last time out in Timaru, Christchurch student Blake Knowles (Van Diemen RF05) was the class of the field winning all three races, taking over the lead in the championship, ahead of Crosbie (Ray GR21), Daniel Brown (Ray GR 21) and Dylan Petch (Ray GR20).

“We had strong pace all weekend at Timaru,” said Knowles. “Last season at Teretonga we went very well so hopefully we can continue our pace there. Alex (Crosbie) will be fast as it is his home circuit. Battling with him at the last round was cool as he is a hard charger.”

Also showing pace this season is Dylan Petch who won the NAPA Auto Parts $230 cash prize for ‘Driver of the Day’ at the last round and is in a fight for third overall with Daniel Brown.

Joining the grid this weekend is Christchurch’s Simon Hunter (Mygale SJ08a) who proved, last season, he is a race winning contender and North Island front-runner Sebastian Manson (Spectrum), who has recently returned from Portugal after competing in the World Rotax kartsport champs. Along with former South Island champion, Jack Noble-Adams (Ray GR21) we are likely to see a top seven-way fight for race victories and podium places.

On the line is a $500 cash prize for fastest qualifier provided by the Hampton Downs NZ Racing Academy. The award is part of the increased $66,000 prize pool from the Tony Quinn Foundation with funding for travel and testing opportunities with TOYOTA GAZOO Racing NZ. Qualifying and the first 10-lap race take place on Saturday with another 10-lap and a 12-lap race on Sunday. 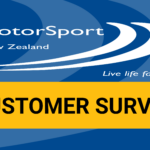