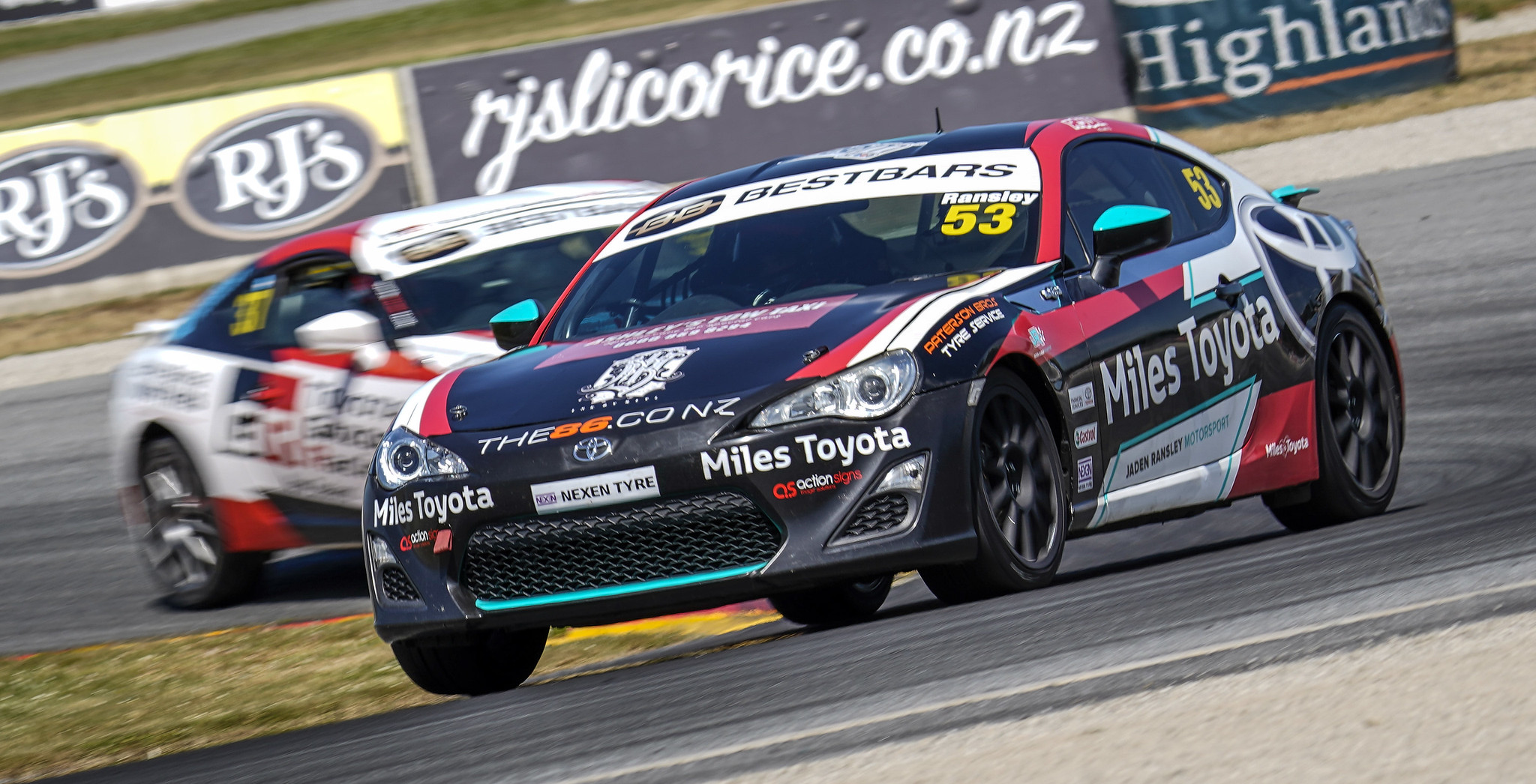 Two wins and second place after three superb races netted Peter Vodanovich the round win at Highlands Motorsport Park in the Best Bars Toyota 86 Championship, but it was Christchurch’s Jaden Ransley who finished the weekend leading the series’ points.

A dramatic win in the final race leaves Ransley with 411 points after two rounds, with Vodanovich in second on 393 points with former series leader Australian Jaylyn Robotham just a whisker behind on 391 points.

In the weekend’s first race Vodanovich withstood huge pressure from championship rival Ransley to hold on for victory.

Pole position holder Vodanovich in the Nexen DTM and CMC Markets car and front row sitter Ransley in his Miles Toyota machine both made great getaways as the race began, sitting side by side on the long drag to the first chicane. Vodanovich braked a touch later and surged through the chicane in the lead. It was a critical moment. Both Vodanovich and Ransley had massive speed compared to the rest of the sixteen car field and quickly established a significant lead over the chasing pack.

“Jaden always hooks up a great battle,” said Vodanovich afterwards. “We’re both quite respectful of each other and it produces some good racing. I was holding, he was quite fast at the end there. I’m happy with the drive. I think it was a bit of car, a bit of driver.

Peter made it two from two with a win in the second race of the weekend on Sunday morning. Once again he enjoyed a fantastic race long tussle with Ransley but this time had to come through from third on the grid to win. Ransley made a mistake mid-race letting Peter through into the lead, but then fought back to mount some serious pressure on Vodanovich in the closing stages. As he had Saturday, Peter managed to hold on for another victory.

“I had a good start off the line and managed to get past Connor quite early, which is what we needed to be able to stay with Jaden as he’s really fast around here as well,” he said afterwards. We were maintaining the gap with Jaden, and I was trying to put some pressure on him. Eventually he made a mistake which he doesn’t make often. I was quite surprised how fast he came back at me. A credit to him, he’s driving well.”

Pole position man Ransley made a decent enough getaway to lead into the first corner, but all eyes were on Vodanovich as he launched from the second row, getting a slingshot past front row man Connor Adam in the Post Haste car and immediately setting off after leader Ransley. Behind the top three the rest of the field got away cleanly. It only took until lap two for the drama to begin however, as Connor Davison made heavy contact with the rear of Richard Peasey’s car and forced both into the pits. Peasey was able to continue but it was the end of the road for Davison in the Highlands Park supported car. Andrew Jackson was also a lap two victim, going off and dropping himself way down the order.

At the front two fascinating battles were developing, one for the lead and one for second, third and fourth. With Ransley and Vodanovich quickly establishing a few car lengths over the chasing pack, it was left to Adam, Campbell Stewart and Round 1 winner Jaylyn Robotham to fight over the remaining place on the podium and fight they did – for the rest of the race.

Vodanovich’s pressure on Ransley at the front was unrelenting and on lap five it paid off as Jaden selected the wrong gear going into turn three and ended up in the gravel. Peter avoided him and emerged from the corner in the lead, while Jaden was able to drive through and resume. Despite dirty tyres for a lap or two he immediately set off after the new leader and slowly began to real him in.

Try as he might, he couldn’t force any error from Vodanovich, the youngster looking even stronger around Highlands than he did when he won the round in the 2019 championship. The two crossed the line just inches apart, but the flag fell for another Vodanovich win.

The third race was the best of the weekend and saw Ransley deny Vodanovich a third straight win after an epic three way fight. Ransley, who had been chasing the flying Vodanovich all weekend at the second round of the championship, made a great pass Peter on lap 8 of the 12 lap race and raced home to win the thriller, with Round 1 winner Jaylyn Robotham in hot pursuit in third.

“We were all really close through the whole race,” said Ransley. “I was hoping that my car was going to come on while Peter’s car got worse. Peter drove a smart race, so did Jaylyn. I got an opportunity after the bridge to get past Peter and took it with open arms. It’s been a good weekend and I hope to do the same next weekend at Teretonga, a circuit I’ve always gone well at.”

It was Vodanovich had made the best start and the battle between he and Ransley that had raged all weekend resumed immediately as Jaden put his car alongside his rival going into Turn 1. Vodanovich prevailed and the two set off to build a lead on the pack as they had done in the first two races, but this time had Robotham in the Eastern Performance Centre car for company.

The three of them remained fender to fender as they built a five second advantage over another great battle, That one was for fourth, fifth and sixth and was initially led by Connor Adam in his Post Haste car with Campbell Stewart for Total Oils and Justin Allen for Battery Town in close proximity. Adam pushed hard but on lap 5 the order changed as Allen made up two places to assume fourth, with Stewart also passing Adam. Allen immediately set about breaking free from the group, but Stewart had other ideas. He went with him and made a great pass a lap or so later to take fourth.

Up front Ransley and Robotham were piling on the pressure and knowing he probably couldn’t force Peter into a mistake, Ransley built a great passing move that started at the bridge and ended as he swept by on the final corner onto the main straight. This time Vodanovich had no response and Ransley raced away to the win. Peter held on for second ahead of the impressive Robotham, with Stewart bagging fourth and Justin Allen an impressive fifth.

Behind the top five Adam held off a closing Ryan Wood – enjoying his best performance so far in the CareVets car – for sixth. Eighth went to Australian Richard Peasey making up for his incident in Sunday morning’s race, while Brayden Philips continued his improvement with ninth in the Caters Tyre Service car. James Wilkins also capped off a solid weekend of racing with tenth after his strongest showing in the series so far. 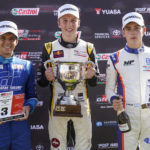 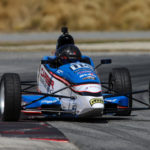