New Zealand driver Marcus Armstrong says he is ready to tackle the trickiest circuit on the 2021 FIA Formula 2 calendar.

Like most of this year’s driver grid, Armstrong is making his debut on the famous streets of the city. He says the narrow streets of Monaco are a profoundly different challenge from the wide open ‘flow’ of Sakhir in Bahrain, where the season began in March.

At Sakhir, Armstrong stormed through the field in the first feature race of the 2021 FIA Formula 2 season to take fifth place and serve notice of his championship intentions. It was a stirring result after the opening sprint races where he was unable to finish race one due to a mechanical issue but then recovered from a 20th start position to finish tenth overall in the second race. Now he will take on the only street race of the season.

“Monaco is one of the most difficult circuits on the F2 calendar; you’re always surrounded by walls. It’s quite rewarding if you’re brave but at the same time it bites hard if you make a mistake,” he said.

Race weekends are all held at rounds of the FIA F1 Championship. This year there are three races per event, while the overall number of rounds have been reduced to eight, with 24 races to decide the title.

On the fabled 3.35 km Monaco circuit, the Formula 2 field has two sprint races of 30 laps (110 km) on Saturday and then a longer feature race of 40 laps (133 km). It is the first time the championship has run at Monaco on the new 18-inch wheel/tyre combination. 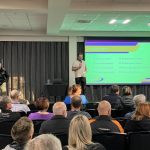