Following the huge success of the Toyota 86 Championship in 2022, the dates for the 10th anniversary 2023 season have now been confirmed.

Its big birthday season promises to be better than ever before for the most popular one make racing series in New Zealand.

The biggest field ever is expected to be confirmed by TOYOTA GAZOO Racing New Zealand between now and the start of the six round championship in January. There’s non-championship action on the big stage to look forward to as well when Supercars return to New Zealand after the pandemic and another major prize pool set to be revealed.

The championship will form an important part of the MotorSport New Zealand Championship season, promoted by the newly-formed NZ Motorsport Group. The 86 field will begin with three weekends supporting the Castrol Toyota Racing Series and drivers can look forward to competing at six different New Zealand tracks.

The season will blast off with a non-championship weekend of action at the Supercars event at Pukekohe Park Raceway over the weekend of September 9-11. It will be a great opportunity for the 2023 championship field to get some racing miles under their belts ahead of the season with official testing also available leading up to the event. Competitors will be racing for a one-off prize pool with further details on this to be released in the coming weeks.

The championship itself – where TGRNZ is confident of an even larger grid than 2022 – begins at Highlands Motorsport Park in January before the trip down to Teretonga the following weekend. After that, the teams head north to Hampton Downs in early February to complete their supporting role for the TRS championship.

Drivers then have a well-earned break until mid-March when the championship resumes at Taupo, before the penultimate round at Manfeild – Circuit Chris Amon in April and the big season finale at Pukekohe Park Raceway in early May.

The annual media and test days are also in the diary again this season, scheduled for 29 and 30 November at Hampton Downs.

“We have included two South Island tracks and all of the North Island venues so there’s good coverage there and we’re also delighted to be on the support card for the big return of Supercars in September. This will be a massive weekend and a great way for drivers and teams to get some mileage in and enjoy a great racing atmosphere.

“We will release further details of the 2023 championship prize package once it is finalised.” 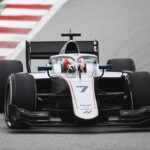 Another win as Armstrong maintains momentum in FIA F2